We present a study carried out by the Centros Cognitiva Unidad de Memoria S.L. which tested the effectiveness of online cognitive stimulation platforms in older adults with cognitive impairments. For this purpose, several neuropsychological tests were carried out on the Kwido Mementia program for computer and tablet.

CONTEXTUALISING. Incidence of dementia in Spain

According to the Fundación Alzheimer España (Spanish Alzheimer’s Foundation), a new case of dementia arises somewhere in the world every seven seconds. Its incidence is especially significant in terms of adults aged 65 to 85, and it increases exponentially with age. Currently, it affects around 25% of people over 85 in Spain. Dementia affects 11.1% of women in our country, while the incidence rate among men is around 7.5%.

Furthermore, if we take into account the increase in life expectancy in developed countries, we obtain an increase in the rate of dementia compared to previous years. According to 2010 data from the Fundación Alzheimer, the prevalence of this disease in Europe doubles every 6.3 years.

The following table presents data from the Fundación del Cerebro (Brain Foundation) on demographic development in Spain since 2001 and the forecast up to 2050. In it we can see how, in just fifty years, the cases of dementia in our country will have doubled in number:

How can dementia be prevented?

As mentioned above, global figures will be equally disheartening if no action is taken. The following is a list of several aspects cited by the World Health Organization (WHO) for our governments to try to reduce the health and social impact of this condition.

In relation to these figures, it is estimated that 87% of the care expenses for a person with this type of disorder is paid for by families and 13% by public bodies in Spain.

Today, the therapies used can be classified as either Pharmacological or Non-Pharmacological Therapies. Within the framework of our study, we will focus on the latter, specifically on individualised cognitive stimulation as the main therapy. In addition, cognitive activities will be performed in digital format, in order to calculate the amount of time and costs that can be saved as compared to traditional therapy using pen and paper.

What is cognitive stimulation?

Cognitive stimulation is a group of activities aimed at maintaining or improving patients’ cognitive functions and life skills. For example, activities are done to improve memory, remember how to handle money, communicate on the phone, or help users orient themselves when they go shopping.

Cognitive stimulation is a therapy aimed at mitigating the personal, family and social impact of cognitive impairment, whether it is mild, the result of ageing, or aggravated by diseases such as dementia.

Traditionally, cognitive stimulation activities have been performed with pencil and paper and the help of therapists. Currently, the rise of new technologies has led to the emergence of platforms developing activities in digital format, for tablet or computer.

With this digital adaptation, the objective is twofold: firstly, to empower older people with the use of accessible technology, and secondly, to better optimise the preparation and performance times of therapies.

The platform we will use is called Kwido Mementia, which consists of a multi-device touch environment that is fully accessible to older people. It offers a cognitive training plan that adapts to different levels, depending on both the cultural level and the degree of deterioration of each user.

Thanks to the intuitive and accessible platform, two Kwido Mementia working groups are formed, the first of which carry out the activities in physical centres (care homes, memory workshops, day centres) and the second will do the work from their own homes.

This study will focus on determining how effective non-pharmacological therapies adapted to digital environments are in treating and preventing cognitive impairment. It also seeks to determine whether performing these therapies influences patients’ emotional state.

At the same time, the study aims to find out to what extent digital therapy saves time and costs compared to traditional therapy.

This involves experimental groups of people with impairment who will work in sessions of cognitive stimulation on computer and tablet over a period of one year. The results are compared to a third control group that does not perform stimulation. A total of 60 to 80 adults over 60 years of age with memory problems, cognitive impairments or other diagnosed degenerative pathologies are participating.

In the following graph we can see how the study is structured according to groups and evaluation frequencies:

The graphs show the data of people who have trained for several months. The results obtained show the data of the users of groups A and B who have carried out cognitive stimulation on tablets. The study began in June, so the data shown correspond to the first four months of work.

Finally, the time savings resulting from the therapies performed using tablet are calculated compared to those that would be performed in a conventional therapy with pencil and paper.

In the first months of activity a marked improvement in the General Cognitive Index can be seen, which stabilises over the following months. 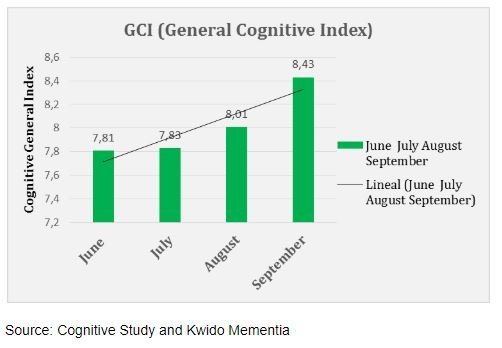 The graph shows how the positive results have a direct impact on the improvement of the emotional state of Kwido Mementia users. There is an increase in motivation with respect to therapy associated with good performance in the use of new technologies (tablets, in this case). 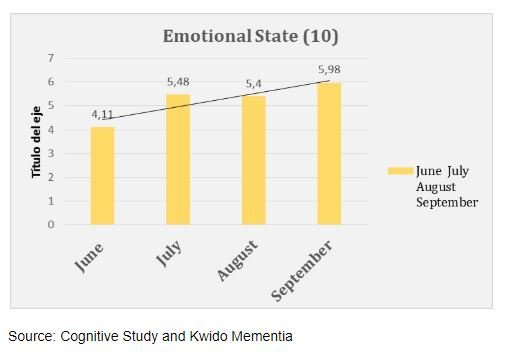 In the self-assessments, each user’s grade is recorded just after the end of each training session.

A slight decrease can be seen in the assessments in the first four months. (It is interesting to analyse the last graph, in which the GCI is compared with the self-assessments.) 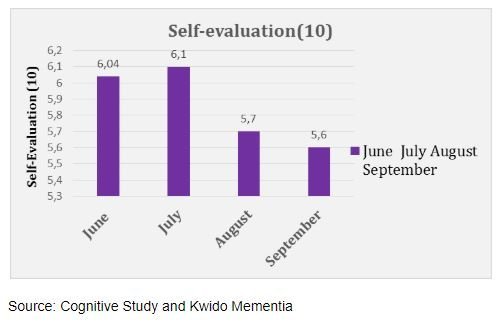 This graph shows how, while the General Cognitive Index improves in the first four months, the self-assessments that users make regarding their performance experience a slight decrease. 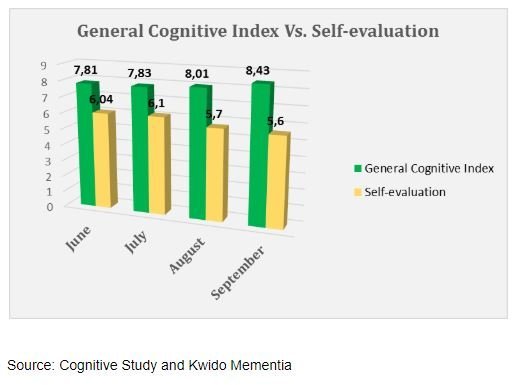 Finally, the measurement of time used in cognitive stimulation therapy using tablets is compared to that used in traditional therapies with pencil and paper, in which a more continuous intervention of therapists is needed.

At the same time, it can be seen that cognitive stimulation practised using digital media increases the motivation of users, allowing them to interact with technology in a dynamic and accessible way.